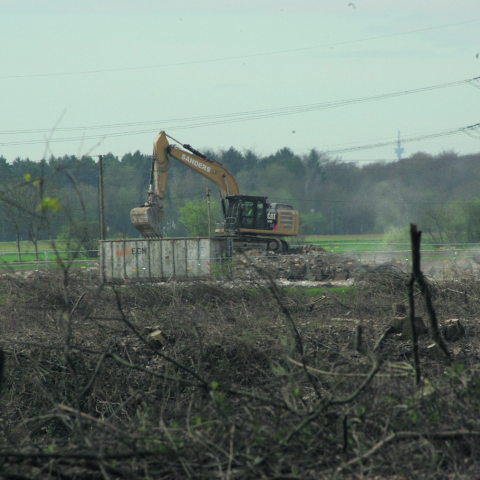 Officially, the forest is owned by RWE — a German, multinational energy company that does not only want to level the ancient forest and destroy its natural habitat but also dispossess and displace residents from the surrounding villages to generate power. With it’s production of lignite in the Rhineland, the company is responsible for a sizeable amount of Germany’s carbon dioxide emissions.

RWE does not shy away from exploiting the entire world in order to maximise its profits. The people who first have to deal with the consequences of global warming will not be those profiting from coal but the people in the Global South.

This makes our struggle part of the struggle against imperialism, against oppression and racism. What happens here does not happen by accident; it is a symptom of the capitalist system and we are working on the means of attacking it.

For five years we have not only been attacking RWE but a system of hierarchy and exploitation that facilitates the company’s mania for profit.

It is very clear to us that the fight for climate justice is intimately linked with the struggle for a world without hierarchies, a world far away from capitalistic coercion where major companies do not yield any power over human beings and nature.

It is intimately linked to a world where everyone has the right and courage to defend their opinions and principles without being silenced by repressions from the state or capitalism.

Only by organising collectively and through courage have we been able to fight for this freedom and maintain it. Despite repressions, despite many of us having been beaten up, abused and imprisoned, we are here and will stay.

With direct action, we have been able to cause damage to RWE. Because of our sabotages and road blockades, the company has lost millions of euros.

Although RWE continues to dig for lignite and destroy everything that is alive and beautiful, we have showed that it is possible to influence events.

In a system that allows a few to exploit an entire planet to still their own greed, resistance becomes a duty.

Time is ticking. If lignite extraction is not stopped immediately, it will become ever more impossible to stop climate change.

Time is ticking for the forest, too. Starting in October, RWE has permission to continue cutting trees.

If the company cuts 70 hectares of forest as planned, a large majority of the ancient ecosystem will be lost irrevocably and the only forest occupation in German-speaking countries will be evicted and destroyed.

This is not only about protecting a forest. This is about global justice, and it is about making a company accountable. We can only achieve this when we are many, when all are fighting the state and capitalism.

Turn your theory into practice. Help us to maintain this freedom and free space, shape it and defend it.

Starting in September, we will hold workshops in the forest that will give everyone the tools to be active in and around Hambach Forest.

We will teach all abilities necessary to occupy a tree and how to carry out other actions.

From October onwards, we are planning a large-scale occupation of the forest, making it impossible for RWE to cut the remaining area.

In case you cannot come to the forest but do wish to help then spread this call. Show that you stand in solidarity with the resistance in the Rhineland, or drop by for a couple of days during the cutting season between October and February.

There are as many possible ways of supporting this occupation as there are people. (Source: Morning star online)
To keep up to date with the action in Hambach Forest visit facebook.com/HambacherForstBesetzung/.