It’s Time to get your Coat, Priti Patel 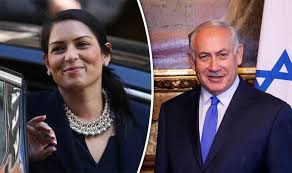 EVEN as Theresa May finally sees no real alternative but to sack Priti Patel, she still oozes weakness because everyone knows this isn’t her favoured option.
She has been reeling since her ill-judged bid to win a landslide parliamentary majority blew up in her face, leaving Jeremy Corbyn looking the winner.
Her billion-pound bung to the Democratic Unionist Party hasn’t made her administration any steadier in the face of instability following allegations of inappropriate behaviour and worse against ministers and MPs.

May’s conclusion that she cannot afford to lose a single minister has been exploited by Patel, who decided that prime ministerial paralysis gave her the opportunity to make foreign aid policy up without recourse to Foreign Office civil servants or anyone else. 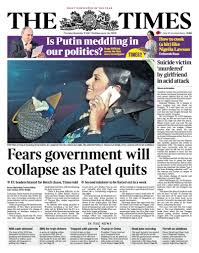 Her 12 meetings with politicians and aid officials in Israel during a family holiday didn’t arise out of the blue.
They were organised by Conservative Friends of Israel honorary president Stuart Polak who sat in on talks despite having no security clearance.
Asked about her failure to consult Foreign Secretary Boris Johnson over these discussions, Patel lied, claiming that he knew.
She also lied about their number and character so that the first the PM knew about her minister’s meeting with Israel’s corruption-mired Prime Minister Benjamin Netanyahu was last Friday.
By then even the dogs in the street understood that for Patel to remain in a job after such a catalogue of misdeeds meant that all discipline had broken down in May’s government.
There was more to come. Patel hadn’t disclosed taking a guided visit to the Golan Heights — Syrian territory occupied by Israel since 1967 and “annexed” illegally by Tel Aviv in a declaration unrecognised by Britain and the international community.
Patel was so impressed by an Israeli field hospital treating Syrian “refugees,” we are told, that, on her return to Britain, she told civil servants to prepare to switch aid from occupied Palestine to the Israeli military.
The government quashed this provocative move because of the area’s status, but more serious is the nature of the supposed “refugees.”
Back in 2015 Israeli Defence Minister Moshe Ya’alon admitted previously denied claims that the field hospital was treating jihadists, including al-Qaida affiliates, wounded in battles with Syrian government forces, patching them up and returning them to the fray
At the same time, Israeli warplanes continue to bomb Syrian troops fighting to drive the jihadist enemy from its land.
This means that the Israel Defence Forces are collaborating with terrorist groups to destabilise Syria and a British minister, flying solo, looks for ways to back them, politically and financially, driving a coach and horses through the government’s professed commitment to a two-state solution.
Patel has indicated her intention to delegitimise the Palestine Solidarity Campaign boycott, divestment, sanctions movement, threatening those she says question Israel’s right to exist.
She must have anticipated that May would eventually have to do something and has set herself up as a potential candidate for the hard right of the Tory Party when the PM calls it a day.
With Michael Fallon departed, Patel getting her coat, Johnson hanging by a thread and her deputy Damian Green under pressure, that might not be too far away.
Until then, the Tories will be at each other’s throats, offering a real opportunity for Jeremy Corbyn to set aside parliamentary knockabout and go for the jugular, setting in train a nationwide campaign to demand an end to Tory government squalor. (Source: Morningstaronline)