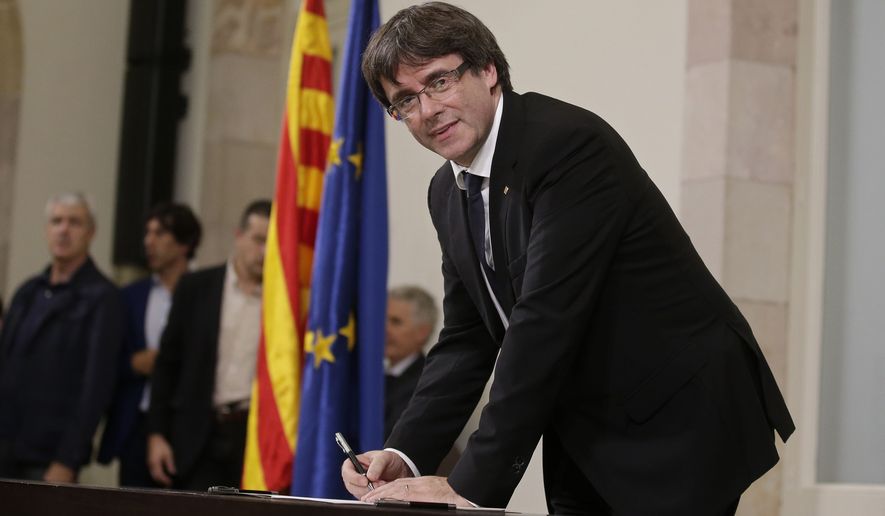 SPAIN’S chief prosecutor Jose Manuel Maza made clear yesterday that he intends to place charges of rebellion, sedition and embezzlement against members of Catalonia’s ousted government, which has been seeking independence for the region.

The rebellion, sedition and embezzlement charges carry maximum sentences of 30, 15 and six years in jail respectively.

Mr Maza added that he would ask judges for preventive measures against the politicians and the governing body of the Catalan parliament that allowed a vote to declare independence last week, but he didn’t specify if those would include immediate arrest and detention before trial.

In addition to the sedition charges, Spain’s conservative government said that ousted leaders could be charged with usurping others’ functions if they attempt to carry on working.

Mr Puigdemont is believed to have travelled to Brussels, according to a Spanish government official, presumably intending to contact European Union politicians and officials to seek their intervention. Belgian Asylum Secretary Theo Francken said at the weekend that it would be “not unrealistic” for Mr Puigdemont to request asylum.

Foreign Minister Alfonso Dastis had clarified on Sunday that Mr Puigdemont would be eligible to run in the election provided he is not imprisoned. “I don’t know what kind of judicial activity will happen between now and December 21. If he is not put in jail at that time I think he is not ineligible,” he explained in a rich salad of negatives.

Interior Minister Juan Ignacio Zoido said yesterday that the government was giving the separatist politicians “a few hours” to remove personal items from official buildings because the goal was “to recover normality in a discreet way and under the principle of minimal intervention” from central authorities.