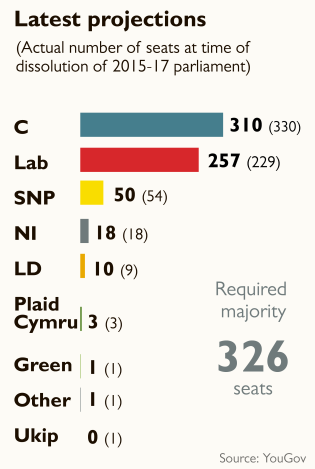 YouGov seat-by-seat analysis suggests Theresa May could lose her majority on 8 June.

A new poll revealed today by YouGov has turned the general election on its head by predicting that the Conservatives will not achieve a majority.

The analysis, published by The Times, estimates that the Tories could be in line to lose up to 20 seats, with Labour gaining nearly 30.

It’s the first poll to indicate that Theresa May could fail to achieve the majority she’d been betting on when she called the snap election. For months the polls have suggested the Tories are miles ahead.

If the YouGov poll is correct, the country will be left with a hung parliament.

The estimated results were “met with scepticism by Tory and Labour figures”, says The Times.

Nevertheless, the news caused the value of sterling to drop sharply last night.

The polling firm predicts the Tories will end up with 310 seats, losing 20, while Labour will gain 28 to have 257. The Tories will still have the most MPs – but not enough to win votes without help from other parties.

YouGov stressed that the figures allow a wide margin of error. Voter intentions are still in a state of “churn”, more than a week before the election, and could still change dramatically, the firm says.

The new figures came from analysing each constituency rather than looking at nationwide polls.

YouGov conducted 50,000 interviews over the course of a week and used data from the Office for National Statistics, past elections and the British Election Study.

The final result is a picture of how the election might have gone last week, if it had happened then.

The Times says Theresa May’s support has “plunged after the poor reception of the party manifesto, including plans to make more elderly voters pay for home care”.

But an ICM poll released yesterday by The Guardian still gave the Conservatives a 12-point lead over Labour.

The spread betting firm IG Index expects the Tories to win 378 seats and Labour just 148, while the latest Elections Etc forecast suggests a Tory majority of 100, The Times cautions.

Andrew Hawkins, chairman of ComRes, told the newspaper: “If voters behave in the way they broadly did in 2015 then the Conservatives remain on track for a 100-plus majority. This seems, on present assumptions, the most likely outcome.”(Source : The Week)